The Minneapolis based Polaris Industries is all set to revamp the first ever motorcycle of America. The modified version is expected to be launched in the market in 2014. The company is yielding its production from its northwest Iowa manufacturing plant. The bike is said to have retained its classic style and juxtaposed it with its advanced engineering.

The Indian launched in the market in 1901, was the first motorcycle brand of America. After it went into bankruptcy several attempt were made to revive its lost glory. But the efforts failed of companies like, Stellican Ltd and Kings Mountain until 2011, until in the year 2013 when Polaris Industries bought it finally. 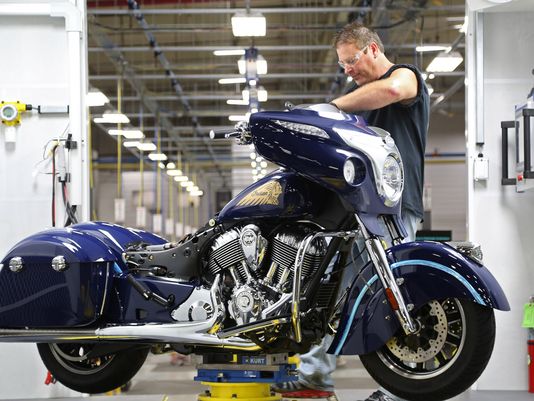 The latest brand has already created a buzz in the market with 50 bikes sold even before it actually hit the market, says the general manager of Indian Motorcycle Lincoln, Justin Vandevort. The hype about the bike and the sell has already enabled the company to expand its business. With its net capital of $30 million, approximately it took initiative to add a new high-tech paint operation, hire work force.

The Polaris Industries purchased a discarded warehouse and factory earlier in 2013, to house its growth. The company has provided tremendous mobility to the area by generating employment. According to the information of the firm, it continued to do pretty well even during the time of recession. This has resulted in revenue increase of the company that doubled to $3.2 billion and the net earnings tripled to $312 million. With publicity of its latest motorcycle the company shares are skyrocketing from $7.30 to more than $116 August 2013. A company official when requested to comment on this said that though the overall market has not shown change in a large magnitude but it is able to get excessive amount of market share from the rival companies.

Market research specialist, Robert W. Baird said that according to the manufacturing capacity of Polaris, it can supply 3000 to 4000 motorcycles in 2013. But since the market buzz is tremendously high, the company might not be able to cater to the demand. The videos have created such hype that customers are ready to pay $19000 without a test drive.

Earlier in the month of August, Polaris held a motorcycle rally with as many as 5000 bikers attending it. According to the company reports, the rally enhanced the publicity of the motorcycle. The strong presence of Polaris at the rally will help it to add up at least 140 automotive dealers in North America.

Market experts and dealers believe that the amazing way the company has shown its power of grasping the market is deeply inspiring. Vandevort adds that one reason for the Polaris to flourish unlike other companies is that though their capital was considerable they lacked the experience and zeal of the Polaris.

It aims to test drive the Indian bikes in Milford. Knutson says that he is optimistic about success in the venture as they an extremely scrupulous about assembling advanced technology with its iconic style inspired by the model of yore.

Toyota To Launch Its Hybrid Vehicle Yaris, In Frankfurt Motor Show Next Month

Will Google Launch Its Own Self-Driving Car?