The World Class Features Of The Latest BMW X5 SUV

One of the leading automotive giants BMW has developed a world-class model with extremely advanced features. The powerful engine and luxurious facilities makes the new X5 SUV truly desirable to the consumers across the world. 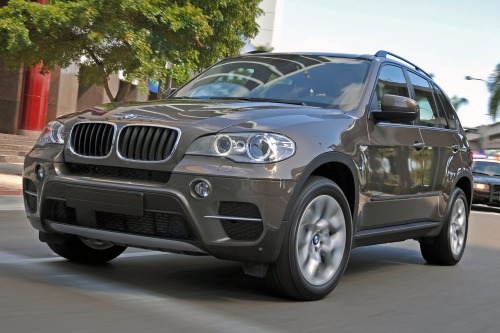 The high-class engine is 3.0 liter, boosted by three turbo chargers. However, one does not get the benefit of all the three chargers until one is aiming at the M50d. The driver needs to place its foot at 2700 rmp after which a narrow opening diverts excess gas far away from Turbo One. It then leads to a Third Turbo consisting of various shapes of blade to decrease the lag. The latest and upgraded version shaves a 0.1 second from the 0-62 miles per hour sprint and that it takes only 5.3 seconds to reach the accepted level and maximum speed is 155 miles per hour.

According to the recent press release the carbon dioxide emission are reduced to a great extent. It is down from 199g/km to 177g. This feature is bound to bring back smile on the face of the car owners. The Toyota GT86 model will now be charged with higher tax than the BMW X5 M50d for the latter’s low emission features.

The car lovers have given quite favorable feed backs to the advanced X5 M. The SUV has enough benefits and characteristics to rank it among world renowned car models like, super charged Range Rover Sport and Porsche” venerable Cayenne Turbo S. The company is further trying to develop the latest M Division X5, which is much similar to the M50d, supplied with suitable wheels and quad exhaust tips. In the front there is twin turbo charged engine with 4.4-liter petrol fed V8. Once it is ignited the power will rise from the outgoing car’s 547 bhp to an M5 busting 565bhp.

Another feature of X5 is its sport body kit. The facilities like, a supplementary air intake and deep chin splitter with 19 in alloy wheels are bound to draw the attention. The buyer is spoilt with comfort provided by bolstered seats and triple spoke steering wheel adorned by an embossed company badge.

The BMW X5 M50d has already created much buzz in the market. Porche’s Cayenne S Diesel cannot be at par with the M50d. The latter has 40 miles per gallon in addition to 626lb ft still out drag a Cayman out of the line. It is further supplied with superb torque however, its V8 timbre is more attractive to the buyers than the M50d. The latest exotic Range Rover Sport’s turbo diesel V8 is no less luxurious. Hence, a car buyer is supplied with more choice than ever, with the range of luxurious cars lining up the ramp.

5 Additions You Should Consider Making To Your Vehicle

Got Engines Offers Online Sale Of New Jeep 3.7 Engine To Owners Of SUV