Black chokeberry is a native shrub from North America. Due to its deep purple and almost black pigmentation, chokeberry has attracted the attention of many health enthusiasts and experts. Chokeberry is known for its various health benefits. Like any dark blue berry, chokeberry is known for its very high level of antioxidants, specifically flavonoids and anthocyanin. It appears that chokeberry is destined to be one of the superfoods. Antioxidants are essential because they can neutralize free radicals. These highly active molecules can cause multiple damages to our body cells, causing many possible damages, such as macular deterioration, Alzheimer’s disease and cardiovascular diseases. 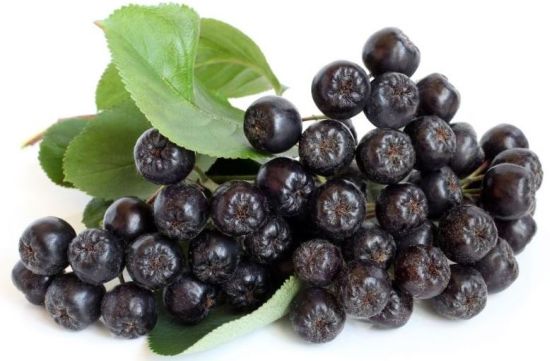 Chokeberries are known for their white flowers and the dark purple berries start to appear in fall. Chokeberry is included in the rose family and it’s known for the distinctive astringent taste. Chokeberry is rarely consumed fresh off the vine. Because it is highly astringent when not yet ripe, it not picked until September. Also, chokeberry juice is somewhat bitter and can’t be pleasantly consumed on its own. Tart is not the right word to describe the taste of unripe chokeberry and some people consider that it is so bitterly sour that lemon taste sweet by comparison. In this case, chokeberry need to be processed before considered appropriate for consumption. Chokeberry juice can be mixed with other fruit juice, such as apple to improve the overall taste.

When fully ripe, chokeberry is very sweet and can be processed into syrup, juice, jellies, jams, various baked goods and light wine. The freezing process can reduce the astringency of chokeberry juice. It should be noted that chokeberry contains high level of tanning and after the cooking process, it should be easier on our taste buds. Chokeberry plant should be quite easy for local growing and there are multiple economic benefits of growing the plant. Despite the significant benefits of chokeberry, the public need to be informed about the benefit of consuming it. With proper preparation and marketing, chokeberry can be a money-making crop.

Chokeberry should be planted by any enthusiastic home gardener. In fact the antioxidant level of chokeberry is higher than pomegranates, blueberries, cranberries, elderberries and even the widely marketed acai berry. Regular consumptions of chokeberry juice should help people with various heart conditions. In this case, the formation of plaque in the blood vessel can be stopped. It means that the rate of progression for the disease will stop. Acai berry consumption has started in many developed countries, such as the United States. It is also highly popular in various European countries, especially among health enthusiasts.

Chokeberry doesn’t only provide us with so much antioxidant; it could also promote proper cholesterol levels. On healthy individuals, heart disease and various cardiovascular problems can be prevented. People who consume chokeberry is known for their normal blood pressure and acceptable blood sugar levels. Chokeberry has exceptional anti inflammatory properties and it could boost our immune system. It fights viruses and bacteria, such flu and colds.

Why is Ovulation So Important?

Common problems flaring up during the tenure of pregnancy