U.S Love For Automobile Is Reducing Since August 2007

Driving rate in America has reduced to 15% since 2007 and experts are questioning is U.S no more interested in automobile? Automobile industry was a flourishing industry in the U.S for last a few decades and it reached the zenith of success during 2007. 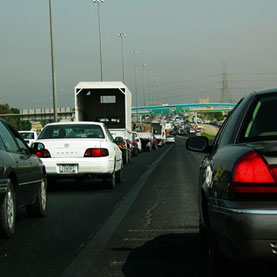 However, when recession strike the country on August of the same year, a drop was noticed and the rate of average miles, being driven by the people of the country, reduced significantly. Well, a few years have passed after that and improvement is there in population and economy as well but no development is noticed yet in this particular field.

During July, last year the average mileage rate though increased to some extent and reached to 900 (per month basis) but certainly it dropped to 820 in August again and no further improvement was observed. The report was published by the transportation department of the country.

According to the report, earlier economic growth was calculated following the driving levels but this practice has changed now to follow the drop in average mileage rate. Since then, the economy has developed more than an auto use. Uses of other domestic product also reduced during recession but that rate has recovered. Experts are now saying that something is to be done immediately to recover the auto rate as well, otherwise economy will be affected again in future.

As auto use has reduced, therefore a significant drop is noticed in the number of license being issued every year for the teens and adults. Carrying a driving license in teenage is no more being considered as legal in the U.S.

Two groups of experts are researching on this issue and they have different opinion on why the average mileage rate is reducing. One group is suggesting that this change is linked to the economical growth of the country. They believe that when economy becomes more stable with time, an increase will be noticed again.

The other group has different opinion and they suggest that economic stability is important but the alteration actually reflects fundamental changes on America’s view of automobile, more than the economic changes. Owning a car is like a headache to most of the users because they have to face lot of issues while parking the car. In opinion of a travel behavior forecaster the idea that owning a car means having freedom, doesn’t exist any more.

Lifestyle modification is also responsible to some extend for the changes being noticed in mileage rate. People are now fond of availing public transport than using their own cars. Adults, on the other hand are often walking and biking to their offices simply for recreation.

Changes in demography may also be accountable for the factor; at least experts from Michigan University are thinking so. They also reported that women now have more driving license than men and this mirror the fact that they have not been able to find a suitable job yet after recession. Men who have been employed after recession are still reluctant to use car, as they want to save the amount required for car maintenance. They rather consider it worthy to utilize the dollars for other purposes.