The Different Types Of Road Studs and Their Advantages

One of the most popular road markings you can widely see among roads, bridges, and subway systems are road studs. These mechanical road markings play an integral role for motorists and drivers to keep their lanes especially when driving at night.

An important traffic safety device, road studs can either be permanent or temporary. Whether these mechanical road markings are permanent or temporary, both should be fixed to the road surface effectively to prevent them from being detached which can cause traffic hazards later on. They should also possess great retro-reflectivity capacity that can stand the weather and other elements for a long term. 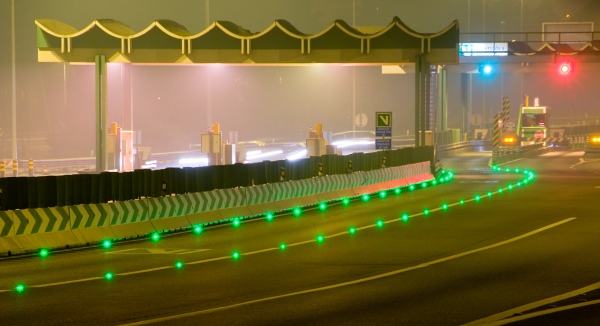 Speaking of permanent road studs, there are two most recommended road studs of this type. The first one is the snow-ploughable, and the other is the raised-and-recessed. The snow-ploughable type of road studs are specifically protected from getting damaged when snow is ploughed and remove from roads.

They are constructed with metal castings, which protect the prisms both from vehicular and snow-plough damage. With its specific design, this type of permanent road studs is most common among areas with relatively high rates of snowfall.

With these grooves, the road studs are then set at their low point with an approximate distance of 1.6 centimetres just below the surface of the road. Permanent road studs of this type are most common among tunnels, bridges, and major highways.

Moving on to the temporary road studs, these are usually installed in areas or roads where construction or work is still going on. The mechanical road markings used is basically the same with the permanent road studs.

The only difference is that the road studs are installed on a bitumen or epoxy overlay. So, when work or construction is done, the temporary road studs can simply be removed without damaging the outer surface of the road.

Basically, these are the main types of road studs that you might not have known before. However, with the tough competition there is in marketing these road marking products, there are lots of modifications and upgrades that were created.

All were made to increase traffic safety, especially in very busy roads. One typical example is the solar-powered road studs. By far, this kind of road stud is most popular in the market today as it is capable of emiting light during night, reinforcing the driver’s vision on the road lane.

Can I Get A Mortgage If I'm Self-Employed?

The Value Of TV Advertising In 2015