One of the most used fishing tackle lures in bass fishing is the stick worm.  Almost every lure company makes a stick worm, and they are a favorite of many anglers, from the novice to the professional.  The reason is – they catch fish, plain and simple.  They can often produce strikes where other lures fail.  They can be rigged in a variety of ways for almost any situation.

A Texas-rigged stick worm can be fished around any type of cover.  Because it is weedless, it does well in vegetation, thick brush, laydowns, and even around cribs and docks.  Because it is weighted, anglers can choose the size of the weight they put on the stick worm depending on the depth they will be fishing and the current, if any, that is present in the area where they are fishing.

A weightless stick worm is a great lure for dock fishing.  An angler can skip a stick worm far up under a dock with just a flick of the wrist.  This allows an angler to present a bait to fish that may not have seen another bait in a while.  When fish stay up shallow on long docks, skipping a fishing lure like a stick worm up under the dock may be the only way to reach them.  Anglers who become proficient at skipping a stick worm will be able to target fish that other anglers miss. 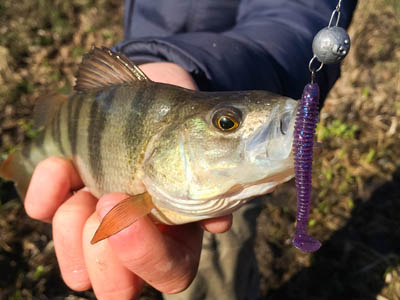 Wacky-rigging a worm is another weightless presentation.  The worm is hooked through the middle rather than through the end.  When fishing around grass or other cover, a weedless wacky hook is a perfect choice.  This presentation allows for an even slower fall, with both ends of the stick worm undulating and quivering in the water as it falls slowly.  Often this is a presentation that a fish cannot resist.

Stick worms are a great option for Carolina rigging, too.  Many otherwise elusive fish can be convinced to hit a Carolina-rigged stick worm being dragged across a point or down a ledge.  Various weights can be used depending on how deep an angler is fishing.  Carolina-rigging allowed the weight to stay on the bottom while the stick worm floats freely behind the weight.

A stick worm may be slightly big for a traditional drop shot set up, but it’s perfect for a power shot.  A power shot is set up exactly like a drop shot, but with a bigger hook, a 3/0 or 4/0, and whatever size weight is needed to get to the bottom.  It can even be used on braid in situations where an angler would normally use braid such as in lily pads or in heavy vegetation.  It is a different presentation that a fish may not see a much. Changing up to this presentation may put more fish in the boat under the right circumstances.

A stick worm is a versatile fishing lure because of all of the ways it can be rigged.  Some anglers may even use it as a trailer for a jig.  The options for this lure are truly limitless.  A stick worm will often produce fish, especially in finesse presentations, where many other fishing lures fail.

For that reason, many anglers don’t hit the water without at least a pack or two of stick worms.