Everyone likes receiving gifts and there is nothing more charming than watching kids unwrapping their Christmas Presents. It is not so much fun tidying up the mess after the excitement is over and then there is the enormous amount of waste. After any good unwrapping session there is always a mountain of paper and ribbons to dispose of and you can’t help wondering how many trees have been felled to produce that paper mountain.

If, like me, you are concerned about waste and would welcome a more sustainable form of wrapping material then there is good news. Two women from Devon have created a new wrapping material that is made from recycled polyester and which can be used again and again.

Wrag Wrap was inspired by the Japanese tradition of using fabric rather than paper to wrap gifts and out of frustration at the sheer amount of waste generated by conventional paper wraps. With the help of several textile experts Nicky Rajska and Louise Oldrige have produced a reusable fabric wrap which never needs to be dumped. The fabric is manufactured from plastic bottles which are broken down to create a fine thread which can be woven into the fabric. 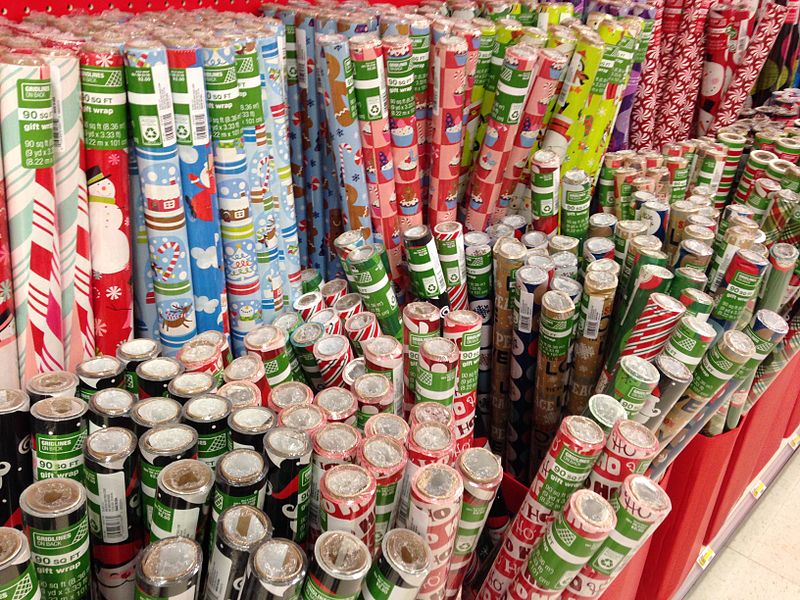 Each sheet incorporates a cord and button making presents easy to wrap beautifully and Wrag Wrap features a variety of attractive designs. The two women have now received the exciting news that sheets of their new product will be included in the goody bag handed out to nominees at the Oscars ceremony this year. The wrapping also grabbed the attention of London shoppers and became a best seller at Selfridges in the build-up to Christmas.

This is all great news in the fight against waste. Preserving our natural resources is becoming an ever more pressing issue and the statistics surrounding wrapping paper are frightening. You might be thinking that wrapping paper could itself be recycled but in practice that is difficult and sometimes impossible. The paper is often laminated and can contain elements which are not recyclable like plastics and glitter and many papers have fibres which are too weak to recycle. Every year in Britain over 5 million tonnes of paper end up in landfill. That paper took 30 million trees to manufacture which is scary!

I have always been concerned about the amount of wrapping paper I throw away. Not only am I left with a massive pile of waste after unwrapping my gifts, I also seem to create a similar pile of rubbish when I am wrapping gifts for friends and family. It takes the gloss of the giving and receiving of the lovely presents. I am clumsy and tend to rip the paper and my cats are rather fond of destroying it when trying to grab the ribbons and embellishments. I could do with cast iron wrapping products but the new polyester sheets sound like my salvation.

Hopefully this new innovation is just the beginning. The wrapping paper dilemma has been solved, and cards are becoming a thing of the past because of emails, e-cards and Facebook. Will we see recyclable decorations like baubles and tinsel and what new ways to reuse plastics will be invented next? Perhaps we can save our forests and drastically reduce the amount of plastic that ends up in landfill.

Sally Stacey is a keen writer and business owner who divides her time between writing and running her shop.

Go Green And Save With Solar Powered Outdoor Speakers