Home » News » The Library Of Trinity College In Dublin
News

The Library Of Trinity College In Dublin

In the XVI century, the English Queen Elizabeth I displayed a desire to see the real Trinity of the British Empire’s best universities. That is why, meeting the wishes of the Irish to create the first university in the country, the queen not only supported its construction, but also gave the Irish university the name of the “Trinity.”

The Irish people were pleased to receive such a name for the university, since the land that had passed under Dublin’s Trinity College had previously been the land of the monastery, called the “Holy Trinity”. As a result, the first university of Ireland, Trinity College, opened its doors in 1592. This educational establishment is one of the top 5 universities in the British Isles and one of the top 100 universities in the world.

For its almost 420-year history, people who have graduated from the Trinity College, have glorified not only this university, but also the whole country. Among them are such luminaries as Oscar Wilde, Jonathan Swift, who wrote ‘The Gulliver’s Travels’; Nobel Laureate in Literature Samuel Becket and Nobel Laureate in Physics Ernst Walton, mathematician William Hamilton, philosopher George Berkeley. One cannot help mentioning the presidents of Ireland, the former (Mary Robinson) and the current (Mary McAleese), who also graduated from the Dublin Trinity College.

To the delight of tourists, Trinity College is open for free visits. You can wander around the cobblestone “Parliament Square”, come to the students’ cafe and even visit the famous library. This library is one of the most beautiful in the world. You can make sure in it personally with the help of car rental at Dublin Airport. The visit of the library costs 11 euro. There are also centralized guided tours. In any case, it is highly recommended to spend a day in acquaintance with the Celtic sources and with the silence of the famous Old Library of Trinity College.

The library of Trinity College is having a tremendous cultural significance. This library occupies 5 buildings, 4 of them are located on the campus, and another – next to the St. John hospital. Though the 1st building of library was built in 1732, the library itself is much older. Today it is having a very special spot among similar institutions. From time to time, it appears in various lists of the world most beautiful libraries. You would be delighted by what you see in the library- everything here is in order, neatly standing on the shelves. Here, you can not only find the most exotic and rarest books, but also admire the oldest editions as works of art.

The pearl of the Trinity College Library is considered the “long hall” – an extended two-level room with a length of 65 meters, in good taste decorated and very solemn. This is a real temple of books. In front of each section of bookcases, there are busts of famous scientists and writers. 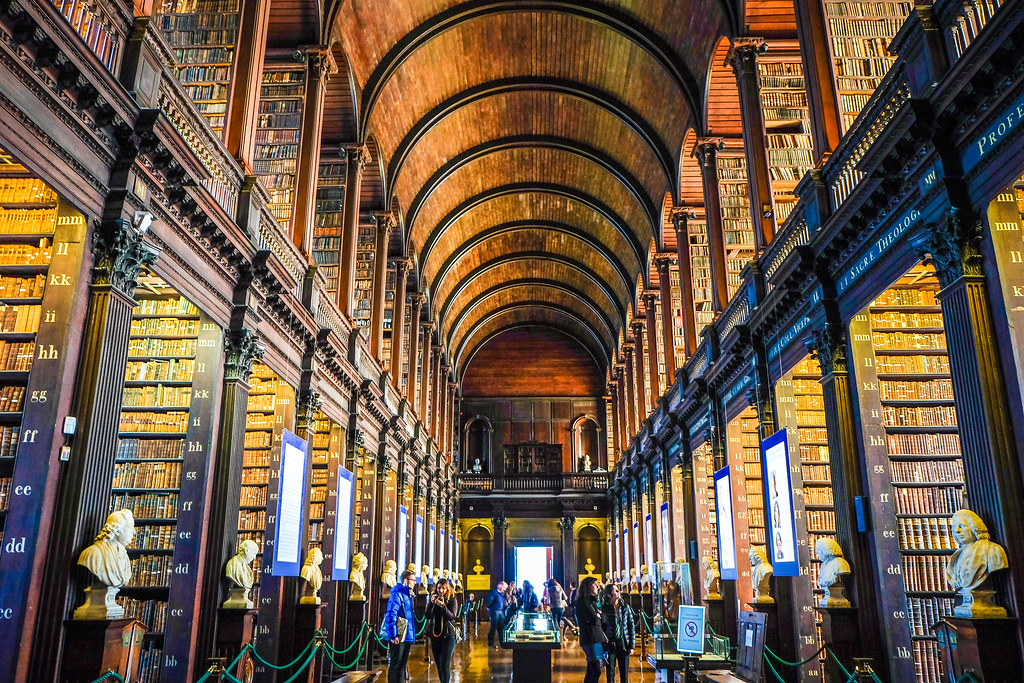 This collection of busts of 1743, on the edges of the shelves, looks very stylish, recalling the wisdom of centuries. The Long Hall is considered an obligatory point in the tourist route also because it contains one of the main symbols of Ireland – the Gaelic harp, made in the 14-15th centuries. An elegant instrument is depicted on the reverse side of the Irish Euro, as well as on the original emblem of the Guinness trade brand.

In 1860, when it was lack of space for books on the shelves, the architects Dean and Woodward decided to raise and lengthen the ceiling and to case it with wood. This is how the curious form of the library appeared, resembling a semicircular barrel.

One of the quality indicators of any university is its library fund. The Trinity College library has 4 million volumes and it is one of the five best universities’ library funds in the world. There are very rare books as well, such as the handwritten Gospel- ‘The Book of Kells’.

The entrance ticket to the Library includes a view of this ancient luxuriously decorated manuscript, which makes up four Gospels.

It is believed that the monks of the Iona Island created this manuscript in the 9th century. Later, in 806, they moved to the monastery of Kells, in the County Meath, escaping from the Viking raids. They managed to save this manuscript. In Ireland, from Scotland, the manuscript was brought in 1653. Bishop Henry Jones handed a precious relic to Trinity College, where it is still kept. There was another version of the book’s origin. At one time, authorship was attributed to the St. Columba – a monk, who converted the people of Scotland in the VI century to Christianity. However, the deep analysis of the book has refuted this version. In the library of Trinity College, there are excursions devoted to the Book of Kells. Two of the four volumes of the ancient folio are presented to the public opened, the pages are always different. You can get on a tour to the library every day. The working schedule varies depending on the season.

In general, the Trinity College library is a real refuge of the bibliophile. Even if you are not yet so strong in English to read something from the collections of this library, you should still visit it. The beauty of buildings and halls has not left anyone indifferent, and a chance to see books written a thousand years ago, could be a chance of a lifetime!

Why To Buy Steroid Alternatives For Women?