The most advanced LED based Audi Headlights are installed in the new Audi A8 along with the sports car model). It is claimed by Audi that the LED based headlights give a unique look to the car both during day and night time. The claim goes further to compare the 5500 Kelvin LED based lighting with sunlight. This brightly shinning light adds to the appearance of the car and also ensures safe driving, especially at night.

The LED based headlights are highly energy efficient. These lights have less power consumption in comparison to the ‘stock headlights’. Plus, the headlights need no maintenance. The life of the headlight is equal to that of the car. The shape of the light is that of a wing and has low beams emerging from 10 lens modules pieces. Equal number of yellow and white LED pieces, i.e. 22 each, is used for turn signals and running lights in the daytime. The design of closely packed LED light compilation gives an appearance of wholeness to the headlights.

Those high beams that are located on top of the wing comprise of two LEDs with four chips each along with a ‘surface reflection’ system. You can change the beams from low to high and vice-versa. If you install more LED based lights you will have highway and cornering lights for your car. The condensation of LEDs that get heated is eliminated through the use of ‘heat regulated’ system or fan. 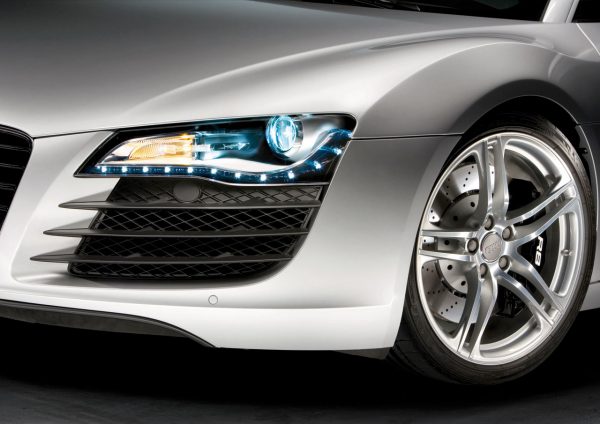 The Audi Q5 Headlights is a combination of Beauty and Brilliance

The tail lights have a total composition of 72 LED lights following this technology. It is possible for designers to install pieces as many as these in a limited region due to the technology of chip-on-board.

The tail lights make up an evenly-appearing ‘trapezoid’ shape. These lights use a total of 9 watts in one unit which is impressively low consumption. A reflective surface is featured in the lower portion of the tail light while the upper portion comprises of ‘light guide’. The tail end’s central portion can be lowered into the ‘lower part’ which is why it has more thickness.

These lights are present within the ‘trapezoid’. If you press the brakes too hard, a flash will be created on these brake lights of A8, warning the driver at the heels of your car. After the vehicle comes to a halt it is the turn of hazard lights to illuminate. When not serving the purpose of brake lights, these LED lights can double up as fog lights for the car’s rear side if customized accordingly.

Along with the normal LED based lights, the Audi A8 comes with ‘bonus package’ of LED lighting. These lights can be used to install on the center console, door pockets, tunnel or the ‘doors sill’ trim. With the help of the ‘Audi Multimedia Interface’, drivers can also make customization of the LED brightness. The LED light concept is receiving much appreciation and maybe incorporated in other such big brand names in the automobile industry soon.

Audi A8 is supposed to be launching a new level of LED headlights which will be worth flaunting. Some of its unique features are discussed in the writing.

Author’s Bio: Joana Hall is a proficient writer who has expertise on the subject of automobile industry. He regularly contributes articles on Audi headlights and other aftermarket auto parts..

What Are The 5 Benefits Of Booking Rental Cars In Advance For Road Journeys?

The Benefits Of Educational Tours