Just couple of months ago, we saw the launch of most interesting device of 2014 i.e. Samsung Galaxy Note 4, and it seems to be really good smartphone. It is already powered with most advanced chipset and display. Need something more? Then wait for the Samsung Galaxy S7

If we talk about the heart of the device, it is all new eight cores processor Exynos 5433. It has four core A57, which operate at a frequency of 1.9 GHz and four core A53, working with a lower clock frequency – 1.3 GHz. Depending on the load and complexity of the problem, the smartphone itself distributes the processor cores on, thereby optimizing energy consumption and increasing productivity. In chipset also includes the popular graphics accelerator Mali-T760, operating at a frequency of 700 MHz.

Galaxy Note 4 RAM is 3GB, and internal – 32 GB. In addition, the smartphone has support for memory cards up to 128 GB. The results of benchmark tests show an impressive performance. The popular test AnTuTu Benchmark v5.1 Phablet got 35268 points in GreekBench 3 – 1197/3909 that is really good.

Samsung Galaxy Note 4 is also equipped with a scanner gestures, geomagnetic sensor, compass, accelerometer and gyroscope. From the outside world smartphone can be linked with set of standard technologies: Wi-Fi, Bluetooth v4.1, Infrared, GPS / GLONASS / Baidu, USB 2.0 and MHL 3.0. 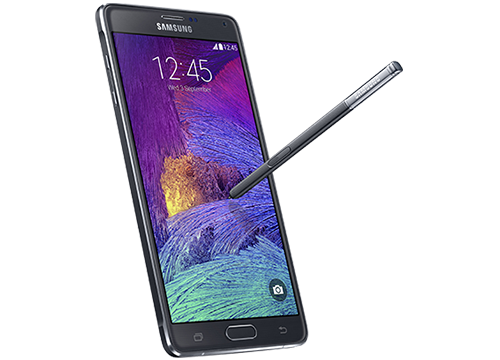 Samsung Galaxy Note 4 is equipped with a powerful 16-megapixel camera, for the development and production of which meets the Samsung. The difference of this matrix from the camera of the smartphone Galaxy S5 is the presence of optical stabilization.

Camera control interface is very simple. It is concise and clear – the same as that of the Samsung Galaxy S5. All the necessary touch-sensitive buttons control shooting is always close at hand.

The front camera has a resolution of 3.7 MP – this is the perfect option for fans of the selfies and communication in web chats.

Compared with Note 3 new battery inside the Galaxy Note 4 phablet changed only 20 mAh, i.e. is 3220 mAh. Charged Samsung Galaxy Note 4 very quickly. According to the manufacturer, if the battery is fully charged smartphone works:

– about 57 hours at listening to music.

With such configuration, hardware, design and amazing performance. Samsung sets new records in Android device gadgets of 2014, and definitely Samsung itself would break it whether it would be Galaxy Note 5 or Samsung Galaxy S7 in 2015.

How To Brainstorm Ideas For A Vanity Custom Toll Free Number

5 Step Procedure To Acquire Business Grant For Your Idea