Home » Business » Banking » How Many Canadians Are Currently In Debt?
BankingBusinessInvestment

How Many Canadians Are Currently In Debt?

With everyone talking about student loans, mortgages, and car payments, it seems debt has become a normal part of life. Surprisingly, 24% of Canadians are free from personal debt, opting to repay their loans or avoiding large purchases altogether. Not only is the majority of Canadians in debt, they’re more leveraged than before, and the fact is consumer debt continues to grow today. 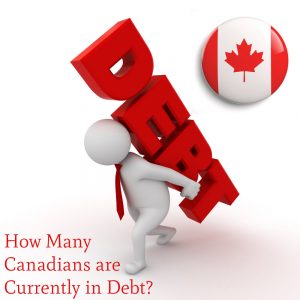 Debt Can Be Useful (Or Not)

Having a mortgage and borrowing money to fund your education can be wise investments. A mortgage forces you to put away money from your paycheques towards an asset that can be resold later. While you’re repaying your mortgage, you benefit from living in a place you can call your own. Student loans are investments in your earning potential, which can payoff in the right industry.

However, having a mortgage you can’t afford is damaging in multiple ways. Failure to make minimum payments on the mortgage can lead to a default in the loan, resulting in financial penalties and the adverse effect on your credit history. Also, investing in a degree that doesn’t lead to an increase in wages means tuition fees didn’t translate into a higher salary. The time spent acquiring the degree could have been used to work and make money.

With lower interest rates, loans currently seem affordable, and consumers have responded by spending more. As a result, Statistics Canada reports that the Canadian household’s debt-to-income ratio is at an all-time high. Some households have already experienced difficulty in repaying those debts in a timely manner, a situation that can happen to anyone. Usually, it happens when people become indebted then suddenly lose their source of income.

Stories like these, along with warnings from other analysts, are slowly turning around consumer appetite for loans at low interest rates. People are also making changes to their budgets, delaying purchases of luxury- big-ticket items such as vacations and furniture- in order to repay existing loans or credit cards.

Features of Canadian Consumer Debt Include:

If you’re struggling with personal debt, know that you are not alone and start making your debt replacement plan without wasting much time. Compared to established families, young Canadian families spend more of their income on debt because it takes a lot to establish a home. All those purchases also tend to occur at the beginning stages, and some of those debts require quicker repayment than others.

In addition, single-parent families have higher debt-to-asset ratios, even when compared to two-parent families where one spouse does not work. Finally, lower income households pay more to service debt because interest rates are not as favorable to people with lower credit scores. Late fees and other financial penalties for failure to repay loans add up.

Clinton Haglund who rose from Toronto in the year 1981. He completed his Masters in Business Administration from Rot man school of management in Toronto.  He had a great passion to business and currently he is running a business in Ontario. Clinton has a knack for helping ambitious business people and to determine how they can get more with less by focusing and refining their business strategy and processes. For more updates you can follow him in twitter @clintonHaglund.

How To Keep Your Desk Clean & Organized

Can I Get A Mortgage If I'm Self-Employed?