For years auto companies have been working to make cars safer for those inside their vehicle. Advancements in airbags, endless crash tests and careful car remodeling to minimize impact have all worked to keep those driving around safe, no matter what hits them. But what about those people taking an afternoon run on the road or venturing out in to crosswalks? Those people weren’t much of a concern to automakers. Until now, that is.

For select 2015 models, Ford will be implementing a new technology that aids drivers in avoiding collisions with the front of the vehicle. Back-up cameras have become common in recent years, but frontal detection is a newer part of the market. In addition to detecting other vehicles or large objects, however, Ford’s new technology can also distinguish a pedestrian who may be in danger of being hit. This not only further protects those inside the vehicle, but also those who may be in the vehicle’s path. 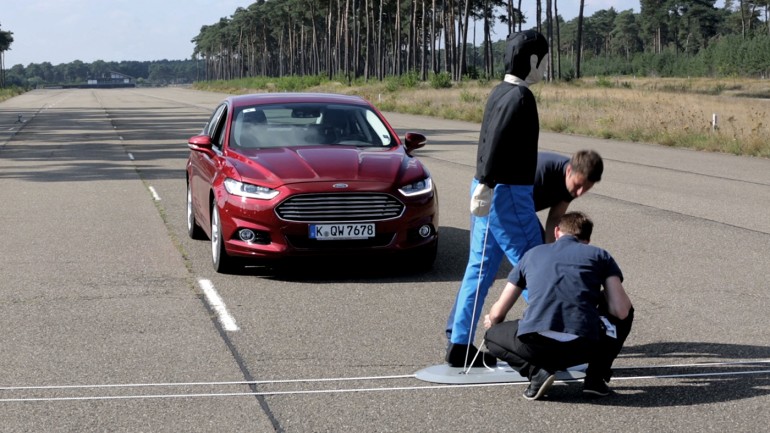 This detection is done through a radar on the front bumper and a specialized camera that is mounted on the front windshield. These two instruments work together to make out shapes that resemble pedestrians, rather than the typical things you may see near the road while driving. Once the system has determined that the driver may be in danger of hitting a pedestrian, both audio and visual alerts will notify the driver of the danger. If there is no response to these warnings, the vehicle will then improve it’s brake responsiveness. If there is still no move to brake from the driver, the vehicle will then apply the brakes automatically, reducing the speed of the vehicle, if nothing else.

Because this is a fairly new development, this new addition does have its limitations. Obviously, it is harder for the devices to detect pedestrians during certain weather conditions, such as rain or snow. The system best works during the day in clear conditions, meaning its detecting capabilities aren’t as sharp at night. As the technology progresses, the system will likely improve to better detect pedestrians at night and in odd lighting situations.

Driving technologies have been slowly piling up over recent years. New features help drivers stay in their lane, assist with blind spots, automatic braking, and even self-parallel parking. As the focus of this technology shifts from convenience to safety, we can expect an increase of features that prevent accidents and keep everyone involved unharmed, both inside the vehicle and out.

Writen by Chad VanNess of Fulton Ford, a Ford Dealership that carries the best line of Ford trucks and cars for sale Columbia MO has to offer, as well as a great selection of used cars and trucks.

7 Popular Types Of Motorhomes You Can Choose From

A Long Drive with 2019 Volkswagen Jetta

How To Properly Pack Items While Renting A Van