6 Of The Best: 6 Sublime Fictional Vehicles

Ahhhh, fast money, fast women and fast cars – the three favourite vices of many a Hollywood A-lister. Since the advent of the silver screen, there have been a whole host of fast cars that have wowed cinema audiences worldwide: the Batmobile, KITT from Knight Rider and Chitty Chitty Bang Bang to name but three. We’ve put together a fun list of six of our favourite and most memorable classic motors, some old school, some weird and some downright outrageous. Would any of these make it into the fleets of fuel card users today?

The Flying DeLorean: As seen in Back to the Future

‘What the hell is a gigawatt?’ The – ahem – timeless classic BTTF brought us the DeLorean time machine thanks to madcap Doc Emmett Brown, which catapulted Marty McFly into 1955 and captivated an entire generation. The DeLorean DMC-12 was converted into a flying version in BTTF2 and transported Marty and Doc from 1885 to 2015. By BTTF3, we were quite sure we should be ringing up Doc and offering him a fuel card… 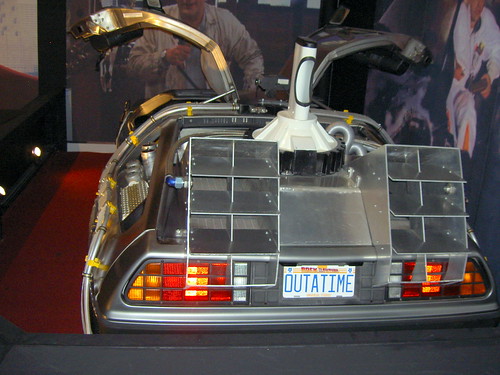 A DeLorean time machine from Back to the Future

Eagle 5: As seen in Spaceballs

From one flying vehicle to another. The Mel Brooks classic Spaceballs featured a standard Winnebago, just with wings. Han Solo, Chewbacca and their legendary Millennium Falcon have nothing on Lone Star and Barf when taking the helm of the vehicle they used to rescue Princess Vespa from the clutches of the evil Dark Helmet.

190 Lotus Esprit S1 Submarine: As seen in The Spy Who Loved Me &For Your Eyes Only

Der, der, der der, der, der, derrrrr! And from the skies to the oceans we go. First seen in The Spy Who Loved Me, the Lotus Esprit is arguably THE iconic Bond car, featuring torpedoes, surface-to-air missiles and the all-important ability to transform, Optimus Prime style, into a submarine. It was (is) every little (big) boy’s dream car.

Ecto 1: As seen in Ghostbusters

A 1959 Cadillac professional chassis built by the Miller-Meteor company was the vehicle chosen by Peter Venkman et al for chasing spooks, ghouls and things that went bump in the night around NYC circa 1984. The car in real life was used as a hearse, which is arguably why it was chosen as a literal joke in the movie. Even to this day, partially thanks to the Ecto-1, Ray Parker Jr. still ‘Ain’t Afraid of No Ghosts’.

Herbie: As seen in The Love Bug & Herbie Goes Bananas

Retro-classic #1, the Volkswagen Beetle. The little lovebug known as Herbie is undoubtedly the cutest car to make our shortlist. In the 1970s series of classic films, we followed the car with a mind of its own to Monte Carlo and many other places besides on a number of wild and crazy adventures, all the while keeping our eyes peeled for any European fuel cards. Thanks for the memories.

Finally we have the oldest of the bunch bar none. The car powered by Fred’s feet alone was practicality personified, literally. A roomy sedan with enough space for the whole family, we enjoyed many an adventure as we rode with the family down the street, thru the courtesy of Fred’s two feet.

As exhilarating and exciting as this bunch may be, for your own needs it’s probably wise to stick to your more traditional fleet of cars, vans and trucks. Take a look at this wide range of fuel cards for some very competitive wholesale fuel prices and pretend you’re driving your favourite fictional vehicle.