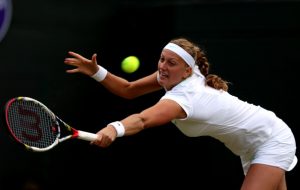 LONDON, ENGLAND – JUNE 30: Petra Kvitova of the Czech Republic in action during her Ladies’ Singles third round match against Varvara Lepchenko of the USA on day six of the Wimbledon Lawn Tennis Championships at the All England Lawn Tennis and Croquet Club at Wimbledon on June 30, 2012 in London, England. (Photo by Clive Rose/Getty Images)

SaveSavedRemoved 0
We will be happy to hear your thoughts